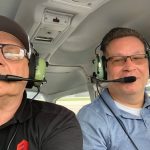 If you recall, last week I took a “borrowed” airplane about half way to Vero and returned when it started acting funny.

David and I had a great flight down to Vero, taking just about an hour or so block to block. No scary hiccups or anything like that. My landing at Vero was not great but not bad either. Wasn’t a greaser but I touched down on the mains first and then lowered the nose. There’s a video of it on YouTube, but it’s sideways (damn iPhones.) I’ll post it later.

As we turned off the runway we requested taxi to the restaurant.

“The restaurant is closed, didn’t you hear that on the ATIS?”

“No, and we listened to the ATIS. Nothing about that.”

“Oh great. Well I’ll cut another one. There’s another guy waiting at the FBO, he was also looking for the restaurant.” 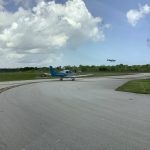 That other guy was my friend Dennis Cooley, who owns a Cirrus SR-22. He had flown over from his home base in Sarasota to join us for brunch.

He met us on the ramp and we were all shocked the restaurant was closed for renovations.

“They have a crew van” Dennis said, “You want to go somewhere near by?”

We visited the FBO first to do our mandatory post flight activities, and then piled in to the crew van. 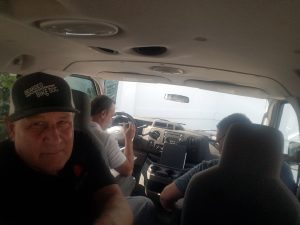 After a few false starts (other restaurants that were either closed or just gone – lockdown victims I guess) we found a nice diner style place with the unlikely name of the Roadside Restaurant.

“Just a good place to eat” the signs says, and it was. We had a great breakfast and great conversations about flying, business and everything else. Tremendous way to spend a morning. Highly recommended. To make it even better, David picked up the tab :) 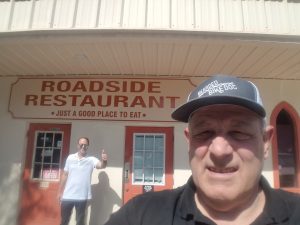 “Just A Good Place To Eat” and so it was. Great traditional breakfast fare, with very nice servers.

There was some weather building on the West Coast so Dennis made his early exit. We topped off in Vero because the gas was over a dollar a gallon cheaper (see PIREP below.)

David took the controls for the flight back home, and only one incident marred a perfect flight – while passing Melbourne, a Piper Cherokee got dangerously close to us, so close that David put us in to a fairly steep dive to avoid him. And of course right after he flew by us, he called up approach and asked for flight following. Go figure.

Other than that, although we were only able to maintain VFR at 3000′ due to a broken ceiling, we got to KORL without mishap, and had a great post flight in Atlantic Aviation. Then David surprised me by handing me a few twenties for his share of expenses. Made it an even better day!

We will definitely do this again, but we have many more airports to try. If you have a suggestion let us know!