A Collection of Humorous Stories from my Aviation Career

To the best of my knowledge, everyone of these stories are absolutely true. They either happened to me, involved me, or were related to me by a close friend. I will be adding to it as my memory allows me.

“While flying as a Beech 1900 captain for a local commuter we had a full house one day on a one hour and ten minute flight. For those of you not familiar with the 1900 there is NO lavatory service on board (a crucial element in the story to come.

About 30 minutes after take off we had a knock on the cockpit door (no Flight Attendant on a 19-seater either). A large, black man stated that he really, really, REALLY had to pee. John the FO and I told him to use a sick sack in his seat. He replied that he couldn’t do it at his seat since he was sitting next to some pre-teen and teenage girls. Sure enough he was. I scooted my seat up as far as it would go and he snuck in behind it. Unfortunately he really had to go and filled the sick sack in no time. Reaching for the first available receptacle he grabbed John’s Coke can. Well his aim in a bumpy flight was only marginal at best so needless to say he began to spray about the cockpit a bit. Those of you who know how small a 1900 cockpit is can appreciate this!

John began screaming as the urine began staining his left arm! Fortunately it was soon over and we landed and taxied in. I fully intended to “enlist” this man’s help in cleaning up the mess, but he bolted for the terminal! He did come back after relieving himself and explained that he had been in a shooting accident (he was a policeman!) and had just had surgery on his kidneys and bladder, which explained his inability to hold it any longer.

John had to continue the rest of the trip with just a T-shirt until we were able to borrow a pilot shirt from a jump-seater, but to this day he is known as Mr. Pee-boy!” 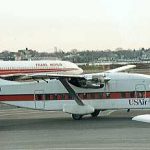 As told to me by C. James, Flagler Airlines Captain

An Eagle crew came up with a novel idea to play a trick on a new-hire flight attendant. In order to understand this story you need to know a few things about the Shorts 360:

On a rainy, icy, IMC evening flight from JFK to Providence, the crew decided to play a trick on a brand new FA, right out of IOE. The FO hid behind his seat and the captain called the FA. “Hey I need your help. First of all, please stay calm.” “Why? What’s Wrong?!?!”

“Please come up to the cockpit and on your way please look out the window and see if you see the First Officer anywhere.”

“What? He’s outside?” said the startled FA.

“Yes. I sent him out to do a routine ice inspection on the wings and he hasn’t returned. It’s been about five minutes and he’s usually back by now. See if you can spot him. Maybe he’s stuck somewhere.”

Well of course she was unbelieving so she ran up to the cockpit and opened the captain’s door. Peering over him she saw that the seat was empty and the andle for the escape hatch was turned a quarter turn.

“Is that safe?” she asked, pointing to the escape hatch. “Well he has to be able to get back in!” replied the captain.

Convinced now that the FO may actually be outside the plane she proceeded to go back to her seat while peering out the windows, drawing some strange looks from the passengers. Reaching her seat she got on the phone. Meanwhile the FO was back in his seat ready to imitate the company dispatcher on the radio. “Did you see him?” “No! He wasn’t anywhere!”

“OK well I guess I better call Dispatch and see what’s up” (sounds of dispatch being rung up using the keypad on the mic).

CA: “Dispatch this is Eagle 555 and we have a problem. I sent the FO out to do a routine ice check per special memo 42-1 and he hasn’t returned in over 10 minutes. Any idea how I should proceed?”

The FO and Captain took off their headsets and discussed their plan!

FO: “Eagle 555 has your Flight Attendant had wing walking training?” (sound of gasp from the FA)

More laughter as they take off their headsets again.

FO: “Eagle 555 do you think she could keep the plane flying while you take a look?” (a startled “No WAY!” from the FA)

CA: “Ah no I don’t think that’d work either”

One more conference on the final blow.

FO: “Eagle 555, we’ll have a new FO ready for you in Providence, have to assume we lost one. In the meantime you better get the FA up there so she can learn how to land that thing while you handle the radios.”

So the captain says over the interphone, “You heard that?” She replies very shakily, “Yeeeaaaah, I’m on my way up there…”

At this point the captain throws open his window (making a LOT of noise) and says, “Oh wait! Here he is! Come on up and see!” The FO hurriedly dons his
coat and poors his entire water bottle over his hair. She makes it to the door and stares at him. “Sorry I took so long, I had to chip some ice off the tail!”

The best part of the story is that they never told the poor girl what happened. I found out about this story for the first time while sitting in the crew lounge in Hartford, hearing the girl complaining that she didn’t think she was cut out for this job, ‘We almost lost our FO the other night!”. You can imagine the rest! I got the rest of the story from the captain who thought this up, who for obvious reasons wants to remain anonymous.

“Guess They Didn’t See “Indiana Jones and the Last Crusade!”
During the Pearl Harbor attack, a Japanese B5N Kate torpedo plane was on the way back to the carrier when the pilot spotted one of the new B-17 bombers in the air. The Kate did not have a forward-firing gun, so the pilot told his radioman/gunner over the intercom that he would fly close by so the gunner could shoot down the American. The pilot firewalled his throttle and the gunner fired several bursts, but predictably, the big Boeing outran them, and anyway, a single 7.7mm light machine gun would not have made much of an impression on a four-engine bomber . . . also lucky for the Japanese that the B-17 was on a ferry flight and its multiple defensive guns were safely in their crates.

Well, the pilot saw there was not much future in this, so he gave it up and told his gunner to report the attack to the carrier.

He heard over the intercom the Japanese equivalent of: “Ah, pilot, gunner, ah, unable your last, um, just shot off the antenna . . .”