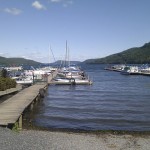 Growing up in Central NY, my family used to sail every weekend at the Otsego Sailing Club (OSC). It was a passion of mine for years, as I became competitive and eventually had a side business making sails and selling racing accessories.

Several times, some of the other younger members of the club would ride their bikes down to the club, a hilly 38 mile ride. I don’t remember why, but I never made the ride myself. When I started riding seriously again a few years ago, I often wondered what that ride would be like.

The chance to do it came up. I was on a business trip to central NY in early September 2013. Of course there were some preparations to be made.

First, I had to find a bicycle. It was not practical to ship one up there or bring it on board an airplane. There were no bike shops that had any suitable rentals available in the area. My brother’s Giant Sedona hybrid / mountain bike was the most promising option, although I would have preferred a road bike for that distance. It turned out to be an excellent choice. Thank you again Bob, for letting me use your bike. 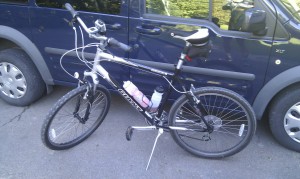 Bob’s Giant Sedona was not a road bike, but I didn’t have many options. 84.4 miles was my longest ride ever on a mountain bike

I planned the ride for Thursday September 5th. It would be my last chance on this trip as I was leaving early Friday morning. I had some time in the afternoon the day before, so I took the Sedona for a test ride on the first part of my planned route, up Graffenburg Hill, considered a Category 3 climb (and would be higher if it was longer). In two miles it goes up almost 700′, with several sections that are greater than 15% grade. The road is a mess, too. In my day, the Oneida county roads were in better shape. Things have declined up there. In the past, you could pass the Oneida-Frankfort county line at the top and the road would improve noticeably on the Oneida side. It is the opposite now.

A quick Android video of the top of Graffenburg.

Thursday dawned with wet roads from an overnight shower, cloudy skies and much cooler temperatures. As I started out climbing up Graffenburg Hill every muscle in my body was saying “Go home. You don’t need to do this.” My mind countered with “You may never get a chance to do this again. Keep going.”

The cold was a problem. The Garmin said 57 degrees. The uphills weren’t so bad but the wind on the downhills went right through my sneakers (designed for running, and therefore cooling) and my feet were getting numb. It took 2 hours to cover the first 19 miles, which consisted of riding up one side of the Mohawk Valley and descending in to the next one (which I believe is Cherry Valley.)

US Route 20 was much more pleasant than I expected. The shoulder was very wide and for the most part clean. Unlike Florida roads, this road seemed designed to accommodate bicycles. It also didn’t hurt that the sun came out (not forecast by the way) and the day started to warm up. I did not bring any sun protection either, which turned out to be a minor mistake. However the rest of the ride I enjoyed sunny skies, and moderate temperatures (high 60s, low 70s).

I stopped at a convenient store in Richfield Springs, 24 miles in. This was to be my primary stopping point for food and liquids in both directions. Not much along the roads up there. The economy of New York State is not conducive to small business.

I was looking forward to Allen Lake Road, as it has many ups, downs, sharp turns and stunning scenery. There is one section where the road descends sharply, turns to the right and comes abruptly back up. It was always fun in a sports car. My brother Bob and I named this section the “Zippity Doo Dah” (no relation to the movie). I was wondering what it was like on a bike. Felt remarkably similar.

Immediately following that is a terraced descent down in to the Otsego Lake Valley, which has a spectacular view of one of the world’s most beautiful lakes.

NY Route 80 winds down the west shore of Otsego Lake, sometimes coming right along side and again offering great scenery. There are some shots in the video below.

I turned in to the OSC driveway and for once I was glad I had a mountain bike with fat tires. It is as I remembered it, very rough gravel with a lot of ruts and grooves. A road bike would have been very interesting there. This first leg took me 3 hours and 19 minutes, and I covered nearly 37 miles on the Garmin. The club was as beautiful as ever. 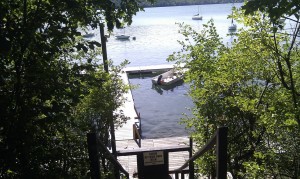 View from the stairway heading down to the dock. The water is crystal clear 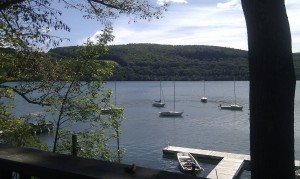 I ate my lunch from the clubhouse porch, enjoying the stunning view of one of the world’s most beautiful lakes.

I visited the docks and found two members, Ken and Diane, who filled me in on the recent club history. 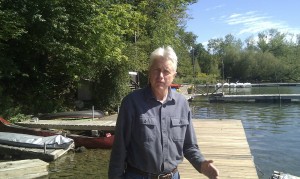 Ken took my picture so I returned the favor. 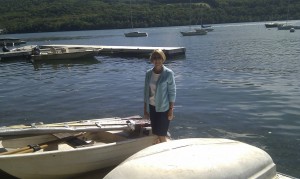 This is Diane. She and I knew several people in common, although most of my contemporaries at the club have moved on. 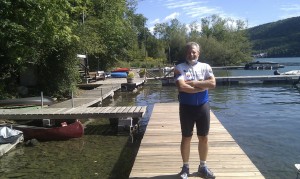 The docks are all weather now, and stay in for the winter. We used to have to take them out every fall and put them back in every spring

After a lunch of cashews and Clif bars on the clubhouse porch, I headed back out. I had two options: to head back or to take the long way around the other side of the lake. What the heck, I thought, in for a dime in for a dollar. I took a left turn and went through the town of Cooperstown and headed for the other side. It is still a very pretty town.

The ride up NY route 31 on the east side of the lake was much harder than I remember. I was doing a lot of steep climbs, and steep descents. To make it more interesting, the NY DOT had decided today would be a good day to put a fresh coat of oil and gravel on the road.

Sidebar: The bike.
I took it to three local bike shops in New Hartford to have it “tuned up” and to add a few necessities, including two water bottle holders, CO2 cartridge and tire pump adapter, spare tube and tire removal tools. The bike handled the job very well, considering it was never intended to do anything like an 84 mile cross country ride. Granted, there were some shifting issues, such as it didn’t like 5th gear and would shift to 4th or 6th at random, usually in the middle of a pedal stroke of course, but other than a few minor annoyances it was a success. It was difficult to get any speed on it though. Pedaling in the top reachable gear on the middle ring only gave me about 18mph. The large chain ring would make grinding noises at inopportune times so I avoided using it. I developed a strategy of tucking in down descents and coasting as far as possible up the next hill before sitting up and pedaling. This helped me conserve energy and sped up my ride considerably. I am very glad Bob let me borrow his bike and I hope he likes the improvements I made to it.

Back to the story. The climbs on the east side of the lake were beginning to tire me out. My legs were getting very sore, as well as other parts of my body. I decided to take a “shortcut” and turn right on 80 back to US 20 rather than climb up Allen Lake Road. It’s actually 2 miles longer but a lot less climbing.

Route 20 seemed to take an eternity to pass by. I stopped again in Richfield Springs and loaded up on cashews, food bars and Powerade. I only wanted one bottle but the girl said “Hey they are two for one” so I took the second bottle. I ended up carrying it back home tucked inside my jersey. I drank it later on the drive back to Florida.

I was worried about Stone Road. It had been a surprisingly long (three plus miles) downhill section on the way out. I didn’t know how my legs were going to take a gradual climb over several miles. I was also worried about the time. It was 3pm when I turned on to Stone Road and I didn’t want to be out in the sun another 3 hours. Ended up being no big deal. The steady climb was not hard and I managed to maintain 8 to 10 mph most of the way. The occasional downhill brought my average up even more. 15 miles later, sitting atop Graffenburg Hill, I knew I had it made. It was 3 miles downhill from here, with a short climb up Slaytonbush Lane to my mother’s house. The video below is a collection of segments from my 9 hour 10 minute, 84.4 mile ride through Central NY.

Looking back on it, I came away with the following:

1: On a sunny day there is no place prettier than Central NY. Too bad it is only sunny 100 days a year.
2: NY roads are very “bike friendly” and the drivers were surprisingly considerate. On narrow roads they would wait for an opportunity to pass rather than try to squeeze me off the shoulder. I heard very few horns and most were of the “toot toot I am coming up behind you” variety. No angry waves or gestures at all.
3: 84 miles is a long way on a mountain bike.
4: Stretches of road that I remembered as being long seemed much shorter at my advanced age.
5: It is good to go back and visit places of my past, not only for memories but to see what changes, and what doesn’t.
6: T-mobile gets no service in central NY. That was a little scary as a cell phone is a lifeline.
7: The decision to push on even though it looked like a bad ride was the right one, as it usually is. The saying is right – “Just Do It”.

Garmin/Endomondo Profile of the ride:

From my brother Bob:

“As I sat at the “above the Crowd” restaurant here at McCormack Place in Chicago ( a nice name for a pizza and dogs cafeteria) I very much enjoyed reading your article and watching the accompanying videos. You write very well. I felt myself escaping this corrupt horrible city and was riding with you up Graffenburg. I could see the rolling hills not only on the Zippity do dah but right as you reach the lake by 3 mile point. I could hear you breathing hard and could feel the strain in my legs by your descriptive narration. I could taste the crisp morning air. Thank you!”