Failing My Way to Success 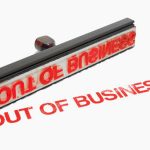 How many times do you need to fail at business before you succeed? I decided to review my own attempts at starting businesses and see how many it took in my life:

1981: I started a partnership called “Racer’s Edge Sailing Accessories” with a girl friend, while living in Rome, NY. Fairly quickly, I learned the negative aspects of seasonal businesses, maintaining inventory and partnerships. It lasted about 3 years before I just stopped doing it, with a garage full of sails, blocks, tackle, other sailing accessories and not to mention an extra boat or two. I think one of the boats is still sitting in the weeds behind the old Pennysaver business in Clinton.

1983: John W. Tenney and Associates actually had a couple of successful contracts, working as a subcontractor for RADC at Griffis AFB, but it didn’t last. I learned quite a bit about the gov’t contractor business though, as well as the perils of media advertising. I placed a discount ad in the family paper, the Pennysaver, and was immediately deluged by sales people from other media. I got suckered a few times too, by a local AM radio DJ, a pen salesman, and a computer supply company. I learned a lot about the politics of contracting though, and it has stuck with me to this day.

1989 thru 2012 (sadly): This included Amway, NetTel, Amway again, Advocare and even a weird one called Zeek Rewards. While I learned a lot about sales techniques, positive thinking and interacting with people, I also learned three key negative but firm reasons to stay out of MLM:

1: There is no room for creativity in MLM. You MUST duplicate exactly what your upline is doing. If you try something new, so will everybody below you, and things get out of control quickly. Doesn’t work for me.

2: Relationships are vertical, never horizontal, in MLM. You only talk to people above you or below you. “Crosslining” is a recipe for disaster. Also didn’t work for me.

3: The government will never allow you to make money without working. That is reserved for government employees only.

1994: OK to be fair, this wasn’t a full time thing. I was doing this for friends in the airlines, who had sideline businesses but it never generated a livable wage. It was educational though. In addition to learning a lot of website design basics I also learned what the market will bear. Everyone wants a “flashy” (pun intended) looking website but they only want to pay about $100 for it. True to this day.

1992 until 1998: Although this business didn’t “fail”, it certainly didn’t meet my expectations or financial needs. It was tons of hard work, schmoozing, and waiting around for people. Hard to insure, too. Absolutely no residual income either. It did lead to a brief airline career which was fun, but also not financially successful.

2001-2004: Tenncom was our attempt to recover after 9/11. Back in to the website business, my wife Kathleen and I got a lot of clients, but all at a discount, so we never made any money. To make matters worse, we took the advice of a college student (big mistake) and started selling hardware. Didn’t I learn about the negative side of inventory years ago? I still have a big bag of 3.5 inch floppy drives in the garage.

2005: Although we started the corporation in 2003 we didn’t start the PEO brokering business until early 2005. It has what we have learned are necessary elements to a successful startup. Here are just some of those points:

So I had six failures before finding the right place. I learned from each one. The business landscape we have today was formed by what I/we learned from those failures. It hurts that we failed, but it is very reassuring to know that without those failures, we never would have gotten here today.

I’m very glad I decided to fail my way to success.