Featured, Professional
by Grand Poobah May 23, 2021

I am going to be posting some articles related to aviation safety. With over 8500 hours total time, I have had some “close calls” now and then. Hopefully others can learn from my experiences. Can’t remember which magazines they were but the features were called “Never Again” and “I Learned About Flying From That.” I never submitted articles but maybe I should have … 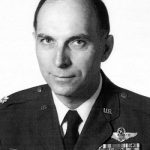 I was a member of the CAP Flying Club in Orlando, FL. My instructor was Lt Col. Glendon W. Perkins, retired USAF. He was shot down in Vietnam July 20, 1966 Released: February 12, 1973. If you witnessed the return of the POWs, he was the first one to walk of the Sabreliner when it landed at Camp David in 1973. He had been imprisoned for 6 years, 6 months and 6 days. I was a little wary of him at first because his license plate was GWP-666 (!). But it made sense after he explained his story. 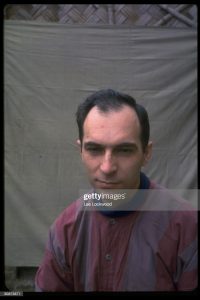 Glen had drilled me in IFR procedures, we had fortunately got a lot of “actual IFR” time (not all hood time) so I was feeling comfortable about flying IFR. He was an excellent instructor, probably the best I ever worked with.

It was late fall 1989. The ink was still drying on my Instrument pilot certificate. I was currently employed as a keyboard / bass / sax player for a touring show band called “Clutch”. We toured several southeast states, going as far west as New Orleans and as far north as Pittsburgh. I decided to build my time by flying to and from some of the gigs. It was expensive of course, but I had saved some money from my days at Martin-Marietta.

At one of my first gigs with Clutch. L to R, Moe, Me, Clark Barrios

On this particular Thursday afternoon, I was headed for Muscle Shoals, AL – our “home city.” We were due to play at the Holiday Inn Friday and Saturday nights. I had a rehearsal to get to at 11am Friday morning (by the way that is early for musicians.

I decided to fly up Thursday, to rest for the evening, but also to visit a girl I knew in town. Naturally. 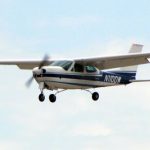 I filed an IFR flight plan for my favorite club plane at that time, a Cessna 177RG Cardinal, N7628V. This plane was very slick, good aerodynamics and 200HP, so it could cruise at 130-135 kts burning only slightly more fuel than a 172 (about 9 gph). I’d been flying it a lot although this was my first out of state flight with it.

As I passed Tallahassee I raised a friend of mine, Willis Foreman, on his Unicom frequency. He had a small grass strip in his back yard which I had never managed to land at, and wasn’t about to now. Still, I always talked to him every time I flew by. Really nice guy, and very helpful in being one of my “side instructors.” Flying safe is about learning from everyone you can, at all times.

“John you have some weather between here and MSL, you feel all right about this?” Willis told me. “Why what do you see?” I asked. “FSS just reported an unforecast line of embedded thunderstorms building up and crossing the state of Alabama, W to E. You may want to rethink this.” I replied, “It’s OK, I’m instrument rated now.” He told me to be careful, don’t take any chances and shortly I was out of range of his handheld.

Lesson 1: Weather doesn’t care what rating is on your certificate.

After some thought I decided to head north and try to go around it. I checked in with ATC and they agreed to my reroute. As I crossed in to Alabama it was dusk but I could see the line to the NW. 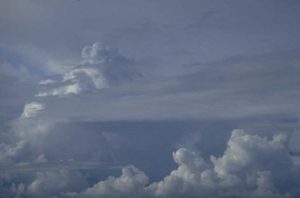 It looked remarkably like this to the NW of me – right where I wanted to go.

JAX finally handed me off to ATL and the first thing they told me was “line of embedded thunderstorms to your NW extending over 120 miles. Say intentions.”

“I have them in site. I’d like to maintain a northerly heading and try to get around on that side.”

“Roger navigate your discretion, advise of any major changes in heading, maintain 6000 ft”

The next 45 minutes were what I now call “pickin’ and grinnin'” – basically picking my way along a wall and looking for a hole to get through. I still had 3 hours of fuel and MSL was less than an hour away, direct flight.

The further north I got, the more solid it looked. It was also now getting quite dark. I asked for some PIREPS. Center told me at one point, “28V, a king air just went through to the west just about abeam of where you are now. He was at FL 180 and reported smooth air. Would you like to follow his path?”

I said “OK let’s give it a try.” I headed west along the vector he gave me. I remember feeling quite a bit of trepidation as I “pierced the wall.”

Lesson 3: PIREPS from larger aircraft may not apply.

Immediately I was uncomfortable. It got bumpy, it was raining hard. Rain was getting in to the cockpit through the door seal. The strobe lights were freaking me out, making the prop seeming to stop in front of me. So I turned them off. Same with the beacon. I left the nav lights on. It was a lousy ride. After one huge jolt I called ATL:

“Center this is no good. Get me out of here. Get me to the nearest ILS airport. I will set it down and wait it out.”

“Chatanooga is a up to your right”

Hartsfield, KATL, is one of the largest and busiest airports in the country, indeed in the world. It was forecast to be 800 OC. They vectored me on to a final for 9R, which was of the middle runways. 8L&R, 9L are north, and 10 is to the south. I flew the approach, got the outer marker and was ready to configure for descent when approach asked me to “keep my speed up.” I had a Boeing 757 10 miles in trail doing 165 kts. I was barely doing 110. Certainly too fast to put the gear and flaps in. I said “I can give you 110 for a bit” – “Approved.”

At 1000′ AGL I started to break out of the clouds and saw the runway ahead. “Runway in sight” “Roger contact tower”

I started to slow down and configure. Flaps 10, gear down … Uh oh, no green light. Crap. “Tower I don’t have a green light on the gear, request a fly by?” “Approved.” And of course he said exactly what you expect. “All three appear to be down and locked.” Always.

I recycled the gear and this time got a light. He let me do a right down wind, and I landed about 2 minutes behind the 757. The ceiling was up to 1000′ at this point and seemed to be clearing slightly.

I felt like this Cape Air pilot probably did, surrounded by “heavies”

The taxi on KATL was very interesting. I was behind one 757 and in front of two more. They must have wondered what the hell I was doing. They told me to turn left at “Dixie”. (The ICAO alphabet mnemonics are changed it KATL, because you can’t say “Delta” and not get confused.)

I parked it at Hangar One and ordered some fuel. The ramp guy came over with the truck and said “What is this? a 210?” Obviously they didn’t see many small aircraft there. Of course, I verified it was AvGas. He told me the AVGas truck usually just sits there. 99% of their fuel sales was Jet-A.

The Trip to MSL and FSS

As soon as I got inside, drained the sumps, and settled down a bit I made a couple of calls. The first was to Wendy, who was waiting to pick me up at KMSL. I told her what was going on. She said she would wait.

Lesson 4: Don’t tell people to wait at the airport. Call them when you land.

Next call was to MSL FSS. (1-800 WX-BRIEF always got you to the nearest Flight Service Station in those days.) I reported I was waiting out the storm here in ATL, when would it be over? “What storm?” “Whaddya mean what storm? I was just getting bounced around in embedded thunderstorms.” “Those have dissipated. Nothing left but some light rain.” No way. It changed that fast? I’d been in it only 40 minutes earlier.

“OK then, here’s my flight plan from KATL to KMSL” and off I went.

Clearance gave me a Standard Instrument Departure, which I had never done except in training. I started to read it back and paused. The controllers there are very understanding. He said “You can expect vectors to follow the SID.” (Thank you!)

I got up to 6000′ and there it was. The wall. I went in and guess what. Same thing. Bumpy, rainy, turning lights off so the prop doesn’t looked stopped in front of me. OK maybe I just need to ride it out.

Wait what was that? I thought I saw stars above me for a second.

“Center, can I request 7000 ft? I think I may be on top there.” “Well it’s the wrong altitude for your direction of flight but you’re the only one out there so go ahead.”

At 7000′ I was clear on top. A beautiful moon, many stars and I wish I had taken a picture.

Lesson 5: A change in altitude can really help.

The ILS in to runway 30 was almost to minimums, but I saw the rabbit, continued, saw the runway and landed. It was now almost midnight. So much for my night out. 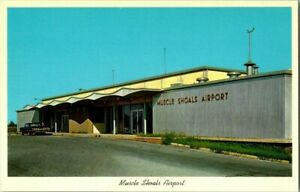 This is an old picture, but that’s what the terminal looked like in 1989

Wendy and her mom were waiting for me in the terminal and neither was happy. They had been sitting there for hours. Needless to say, my night was “uneventful.” The couch was fairly comfortable though …

Lesson 1: Weather doesn’t care what’s written on your certificate.
Really, how did I not realize this. Just because I was an instrument pilot didn’t mean I could go through a line of embedded thunderstorms. Now, in my “later years” I won’t even try it. I’ll land and wait it out. As one of my flying mentors, Paul Allen told me; “There’s no future in flying in thunderstorms.”

Lesson 2: Weather doesn’t care about direct flight distances.
It was a good thing I had topped off the plane instead of “filling to the tabs” like we usually did. When I landed in Atlanta, I had about an hour of fuel left. That would not have been enough to get to MSL, fly a missed approach, go to the alternate and hold for 45 minutes.

Lesson 3: PIREPs from larger aircraft may not apply.
Well duh really. For me to think I would have a different experience than a King Air was foolish.

Lesson 4: Don’t tell people to wait at the airport.
“If you have time to spare, go by air.” The axiom is often proven true. This time was no exception. Knowing that people are waiting has been the cause for many errors in pilot judgment. Don’t be stupid.

Lesson 5: A change in altitude can really help.
I can’t tell you how many times in the airlines a 2000 ft change smoothed up a rough ride. It was a lesson I kept with me all these years.

Bonus lesson: Slow Down.
You will make up the extra time you spend doing a thorough preflight and weather planning, and if you don’t? It’s not worth the trade off!

Remember: “A superior pilot uses his or her superior judgment to avoid needing superior skills”