This story was painful to write, as the memory of the pain I experienced fighting this condition was unpleasant. It’s only because several others currently fighting RA have asked me to write my story that it is here. I hope it helps and inspires those of you. 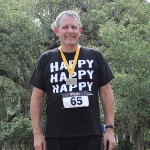 “You will probably never run again, at least not any distance.”

Harsh words from Dr. Richter, then my rheumatologist, as I sat in his Utica, NY office with my crutches in the spring of 1986

About 4 months earlier I had contracted Reactive Arthritis (or RA, formerly known as Reiter’s Syndrome. If you want to know why do a quick search. Not going in to that here.)

In the late fall of 1985, I was an engineer at GE Utica, active athletically, musically and of course socially. I noticed a burning sensation when urinating. I went to the doctor, figuring I had caught something. He and his staff could find nothing.

All tests came up negative. “Non-Specific Urethritis” he called it. “Take these for a week, it will clear up” and handed me a prescription for anti-biotics. It cleared up as predicted, but about a week later I was in my office and my eyes felt really dry. “You don’t look so good” my office mate told me. “Your eyes are all pink, like you’ve been exposed to some bad smoke or something.” I decided to go home and heal. Turned out to be a bad night. About 11pm my right big toe started hurting very bad, like it was broken. I hadn’t stubbed it though. The rest of the night was me getting up every five minutes and crawling, not walking, to the bathroom. I had to pee over and over, and not a little. It was obvious my body was trying to flush something.

At 6am I was panicked and had enough. I called my dad to come get me and take me to the hospital. I was sure my toe was broken and going to fall off. The pain was incredible. However, the ER doctor told me not to be surprised if the xray came back negative, and it did. He said “You are too young to have all these things going wrong at once. It has to be a single cause. I’m guessing it’s Reiter’s Syndrome.” He was right. Nothing on the xrays, and tests for things like gout also came back negative.

They gave me a prescription for a drug which was really bad for me – Indocin, a trade name for indomethacin, a very strong anti-inflammatory, which although reduced the inflammation and the pain, absolutely ruined my stomach. Spicy foods are no longer in my diet and never will be again. I began to realize that doctors don’t know everything about the drugs they prescribe. I am still suffering with gastro-esophagal challenges today.

The next few months were a low point in my life. I had asymmetrical arthritis, which means it was all over the place. As mentioned before my right toe, my left ankle, my right knee. At one time both legs began filling up with fluid, and swelled up below the knee. It looked like elephantitis from the scary Nat Geo videos they used to show in high school. 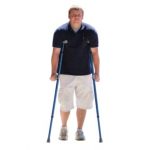 There are no pictures of me from that era, I avoided cameras, but this is basically what I looked like

And always the pain. I wasn’t “stiff” – it hurt. I had crutches to walk. I had a handicapped parking sticker and I began to appreciate those parking spaces in a way I never had before. It still infuriates me to see someone who is obviously not handicapped to be parking in one, or using a sticker that is clearly not theirs. That’s for another story later.

So sitting in Richter’s office, he told me: “10-15% of the time this happens once and goes away for good. 10-15% of the time it never goes away. The remaining 70-80% inflicted will have relapses throughout their life but each time it will be lower intensity, until they are old, when it will hit harder. You’ve had it for almost 6 months now so I would surmise you are in the ‘never goes away’ group.” Well he was wrong about that …

He also said, ” I advise staying off your feet and here is a prescription for Ibuprofen for pain. The Indocin was a mistake. Medical authorities are no longer recommending that drug because of the negative effects it has on the stomach lining.” Gee I wish that ER doctor had known that.

I couldn’t accept the rest of his diagnosis though. I didn’t want to be a “cripple” for life. I began researching the disease of arthritis. This was before the internet so I was in the local libraries a lot. It turns out that nobody knew much about it. Still much the same today in fact. We know why the body inflames joints but not why it keeps doing it after the foreign substance has been dealt with. We know people with a certain gene (HLA B27) are more susceptible to reactive arthritis.

One thing for sure, while there are a lot of symptomatic treatments, there is no medical cure. There is not really any research going on to find a cure either, as the treatments are very lucrative for pharma companies (Naproxen, Celebrex, etc, you’ve seen the ads) but there is no money in curing it. That’s for still another story later …

I got rid of it. Well at least changed my diagnosis. I am in the 70% now. It comes back once in a while and in lesser intensity. I also know how to get rid of it then as well. Want to hear how?

How I Beat RA 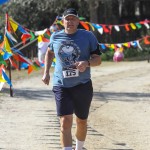 Barely moving at the finish of my first half marathon. However, just by finishing I beat the odds

• Exercise and Stretching
While I was researching I noticed one comment in a medical journal: “although painful, several patients noticed a reduction in inflammation after being forced to move and exercise the joints repeatedly.” I asked Richter about it: “Will exercise hurt me? If I go run a mile, will it damage anything?” He replied: “No but you will be in a lot of pain. That may increase inflammation.” I asked: “Is that damaging?” He said: “No, you have inflammation already. Increasing it will just cause more pain. I don’t see why you would want that but no, you won’t damage anything as fas as I can tell.”

So I went running. The first mile was hell. Every step hurt. A lot. I mean like on fire a lot. The second mile was better. By the third mile I felt very little pain. The knee and the ankle felt warm but not painful. I did a long stretching session afterwards as well. After the cooldown was another story. As I cooled down the pain returned and the next morning was really an eye opener. It was very painful just to get out of bed. Stretching helped in the morning. I’ve also found that doing some mild stretching before bed helps me sleep better as well. However, I was still in pain and taking Ibuprofen the second day.

I decided to keep my experiment going. This time the pain was gone after one mile. Miles two and three were smooth. It took a little longer after the stretching and cool down for the pain to return. I was hopeful. Even though it was still really bad in the morning it wasn’t just quite as bad.

I continued this for five days. By day five there was very little pain upon waking up and only minor shooting pains throughout the day after the run. Really, it was gone. The next few months were essentially pain free. I had another flare up in the next winter which brings me to point 2:

• Warm, Humid Climate
Now I know why old people move to Florida. It does wonders for arthritis. Cold, dry weather in NY was terrible. I was 30 when I moved south and looking back I don’t know why I waited so long. Warmer temperatures means better circulation and that may be a critical thing. Keeping the blood flowing through a joint has to be a good thing.

• Hydrate
“A dry joint is not a happy joint” – not me, some chiropractor’s book I read, but it’s true. Drink water. Lots of it. Reduce the alcohol as well. I rarely have a second beer on social occasions and most days go without it at all. It is “anti hydration”. The positives of staying hydrated are published in many other places.

• Drugs Don’t Cure, They Just Treat Symptoms
While I will still take a couple of Alleve now and then to deal with joint pain, I know that it is just masking the pain and not curing the cause. Go exercise, drink water and stay warm.

How Am I Doing Now? 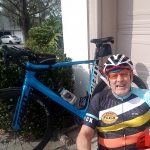 I still get flareups. Often in my lower back, but that may be due to all the running and high impact bicycling I do. Stretching works well there. Recently I had a flare up in my right heel. I stretched it frequently and it went away after a couple of weeks. It was minor, really.

As you recall, I was told I would not be an athlete in my life. If you refer to some of the other articles in this blog I think you will see that is not so. I’m enjoying a healthy, active life and I know in part it was due to overcoming the challenge of beating RA.

If you are fighting it, and want to talk, or if you have a success story of your own, please let me know using the contact form below.

> >> NAME: Jerry
Wow John! I have been diagnosed with Anklosing Spondilitus. I take Remicade every 6 weeks by transfusion. It’s not bad but, the treatment effectiveness lessen over time.

I too want to be able to walk and ride my bike. What it seems like is you pushed through pain to get to a good point.

Do you do this every day Or every other one? Do u have a regimen you stick with?

I feel better biking vs walking. I do use essential oils and massage. They help.

I live in Washington State. Not best weather. All though sometimes I find I do better in the wet cool weather. Or even the dry cold. Not always.

I am 59 and tired of the drugs. Any suggestions would be welcomed!

Thank you for the article. God Bless you and your family!

| Jerry,
>
> When I get it now it is very mild and takes a week or so to “exercise away.”
>
> When I was 29 though, that first week was an act of faith against severe pain.
>
> My regimen is to try to get 30 minutes to 1 hour on some sort of bicycle every day. I have a trainer I use indoors during inclement weather.
>
> Stretching helps too – but take it slow.
>
> I don’t take any drugs really, except for maybe an occasional Advil or Ibuprofen (once a week, if that.)
>
> Warm, humid weather seems to work best for me.
>
> Thanks,
> John
> johntenney.com