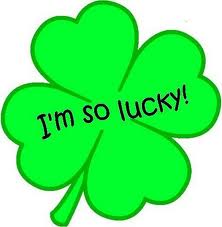 Do you hear this when people see something that is part of your life, or someone’s life, that they wish was part of theirs? It’s a common expression but think about it, by saying that to someone what are you saying? I suppose on the surface it says “I wish I had your lifestyle.” Let’s dig deeper though, what does it really say? Perhaps the intent of saying “You are lucky” could be translated as “I made just as good life choices as you but somehow you got a better outcome.” Is that closer to the truth?

I have now been alive 54 years. I can’t say I ever saw anyone that was truly “Lucky”. It’s been said that “Luck is when preparation and opportunity come together.”

May I share a personal example? On September 10, 2011 I was a Boeing 737 First Officer for Midway Airlines. On September 12th, we all received emails telling us that the airline was shutting down, “good luck.”

“Fortunately” (“Lucky for me!”) I had a second job. I was working part time as a consultant for a local charter company. I went to work there full time. Now really, was this luck? Or was this being prepared?

Obviously, no one could be prepared for the devastation caused by the terrorist attacks of 9-11-2001. The nation was in deep shock. I never expected the charter job to become full time.

Continuing on with this story, it quickly became apparent that the charter job was a dead end. The future I desired was not going to come from there. At first, I tried to change it. I made several attempts to grow the company, many of them successful, but it was privately held, and I knew the owners would never really share the equity I was creating with me to the extent I wanted.

This was made glaringly apparent when I solicited, researched, arranged and closed a large charter deal that netted the company $30,000. I asked for a $5,000 commission. The answer I got was a shocked expression and an exclaimed “Five Thousand? Are you crazy? We can’t pay you that much. We can give you Five Hundred maybe …”

That was also the sign that I needed to build my own business, and take control of my own financial future. I began to form the Tenney’s Rules of Financial Security. The rules grow as life goes on but here are the Thirteen Rules About Luck.

Rule 1: Good Luck is When Preparation and Opportunity Meet
From this point on I was determined to be prepared.

Rule 3: Nobody Else Will Look Out For You As Well As You Do
Translation: If you aren’t in control of the money, you won’t get it. Sadly I had to have two incidents like the one above to make this point. This also leads to the next rule:

Rule 4: If You Don’t Control It, Then You Don’t Really Own It
That’s important. I remember being told as a multi-level distributor that I “owned my own business.” I can see the fallacy in this now. I had only one supplier, inflexible pricing and no options. In short, I was on my own with no control over what I could sell or how much to sell it for. I had “rules” to follow which basically prevented me from getting any position or advantage over any other distributor. There was no compelling reason to do business with me. This, among many others, is a reason I do not like multi-level businesses.

Another thing people think they “own” but they really don’t: real property. If you think you own your home now that you’ve paid your mortgage think again. Just try missing your property taxes for a few months and you will find out who really owns your home. This was another good lesson that led to the next rule:

Rule 5: Equity In A Home Is Mostly Worthless
The mortgage bankers are now screaming “heresy! blasphemy!” but this is true. Unless you have a home equity line of credit (HELOC) that is unilaterally irrevocable equity in your home is not going to help you at all when you really need it. Think about it. You get disabled, lose your job but you have all this “equity” in your home. Just take out a loan and live on that until things improve right? Hmmm, nice plan but I never met a banker who would lend you money unless you really didn’t need it. Even on equity loans they want to see income, and income that is capable of repaying the loan in a timely fashion. So don’t count on home equity as a “security blanket” – it isn’t!

Rule 6: There Are Friends In Business, But Only So Far …
I have done my best to surround myself with people I like and trust in business, but I always remember that even friendship will wither when times get hard. This is not cynical, it’s just fact. When it comes down to a person feeding their family, friendships have to take second place. So the next few rules apply to this rule.

Rule 7: Get It In Writing, Signed, Dated and Maybe Even Notarized
I had a lawyer tell me once that his primary source of income was other people’s failure to prepare written documents. While he enjoyed working for people who got everything in writing, he had to admit that the lion’s share of his fees were from resolving disputes between people that did not have written agreements or contracts. It may seem silly at the time but 10 years from now that contract is going to mean everything to you. Get it in writing.

Rule 8: To Keep Your Friends in Business, Give Them Something to Lose
Keep it equitable. If your friends are gaining as much from you financially as you are from them, the friendship will not be as strained when times get tough.

Rule 9: Always Get an IOU for Everything You Do
This is actually a rule by David Sandler, but I’ve said it enough that it’s been adopted in to the Tenney Rule Book. I’ve taken expressions such as “don’t worry about it” or “no big deal” out of my vocabulary. Instead I say things like “I’m sure if situations were reversed you would do the same for me” or similarly if I know them well “you owe me one.” People keep score. You know they do. All we are doing is helping them remember the score. Conversely, if someone does something above and beyond for me I remember it.

Rule 10: Become a “Trusted Adviser”
This is also from David Sandler. A trusted adviser is someone who would never knowingly give you bad information or attempt to mislead you. This also involves being an expert at something. I’m not suggesting you give away “free consulting” but if it is in your best interest to advise something, then do it well and with their future in mind.

Rule 11: Your Time is Your Most Valuable Asset
You can always make more money. It is impossible to make more time. Use your time wisely and use it the way you decide. Once I learned to stop letting other people control my time, my lifestyle became much better.

Rule 12: You Can’t Enjoy Life Without Good Health
The most important thing you can control, other than your time, is your health. You can’t be a good steward of your life if you are sick or unhealthy. You will also enjoy your life much more if you are in good shape. There is nothing more important than this, nothing! You may think spouse, family and things like that come before health but they don’t. Believe me, your spouse, family and friends would rather have you healthy and taking care of yourself than otherwise.

Rule 13: There Is No Such Thing As Luck
There really isn’t a rule 13 but I couldn’t have a story about luck without the number 13 in it could I?

That’s enough for now. There are other rules, corollaries, guidelines and watch words that are important but this is a good start. Someday I will publish the complete Tenney Rulebook, but until then I plan to enjoy my time, my success and my lifestyle.