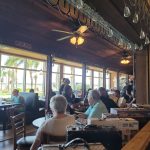 They say third time is the charm. Indeed, this was my third attempt to fly to Vero Beach and have lunch at CJ Cannon’s. And it happened.

Mike Harding called me Tuesday morning and said “I had a meeting cancel. You want to fly to Taco Tuesday?”

“It’s kind of late Mike, we won’t get a parking spot. You want to try for Vero instead?”

Mike was up for it so off we went. 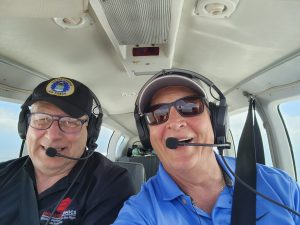 As I have told my readers before, Mike owns a BE-24, Beech Sierra. It’s my favorite low wing single, because it has doors on both sides. I do not enjoy climbing in and over people to get to my seat, do you?

Anyway, enough of that. Let’s talk about the trip.

As is usual in Florida in the spring, there are a lot of frontal passages. Over the weekend we had a cold front go by that gave us some rain, and of course left us with some gusty winds.

It was 4500 Broken w gusty winds out of the southeast, which pretty much gave us a direct headwind on the way down. Mike is a great pilot and he handled the bumps and the winds with aplomb. His landing at VRB wasn’t stellar but nothing broke and we managed to walk away. Makes it a great landing in my book! 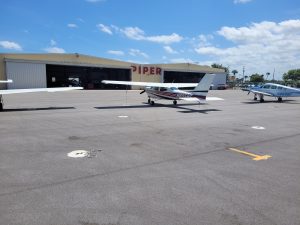 We parked in front of the Piper Aircraft hangar – lot’s of Meridians, Malibus and even one Navajo. They parked us next to a nice Cardinal RG, which we drooled over. Both Mike and I flew a lot of 177RG back “in the day”.

There is actually a ramp right in front of the restaurant where we could have parked. Really though, we both need the exercise and it was a nice day, if somewhat breezy, for a walk.

No Beer for Pilots

As we walked in and were being brought to our seat, Mike said “We’re pilots, so we can’t have beer, but you can bring us some whiskey.”

The poor girl looked shocked. I think she finally figured out he was kidding. I think.

Mike ordered a “mocktail” of Club Soda, Cranberry Juice and a lime. They brought it but forgot the lime each time. Mike said it was still good.

CJ Cannon’s is a large place with several sections, including a bar, restaurant, outdoor seating and what appeared to be some banquet rooms. The menu is very good with lots of selection.

I ordered an open faced Roast Beef Sandwich, which was excellent. The hush puppies were great too. I was not thrilled with the steamed broccoli, and in fact I think I had a digestive reaction afterwards as I had to make a “quick step” for the rest room at Sun Aviation.

I don’t blame the restaurant though. Supplies are short right now, and the idiots in Washington aren’t doing anything constructive to help that. It was probably slightly old broccoli.

Even with the reaction, I give the place 4 stars. 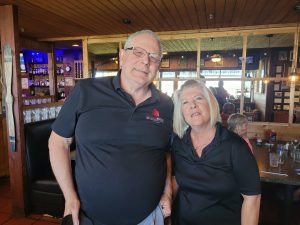 Ruth was our server. Except for forgetting Mike’s lime for his drink, she did a great job and was very friendly.

I am getting way too familiar with self fueling pumps. I never wanted to do this. However, at 5.95/gallon, as opposed to 6.95 full serve, it was necessary.

We only took about 15 gallons but the damage was still in excess of $90. Yikes.

The cost to me wqas Lunch and my share of fuel.

Mike has a full time instructor but I gave him dual anyway. Hopefully he progresses with his next rating.

If you want a nice place to sit down, be served good food, and see a lot of aviation history on the walls, this is a great place to go. I recommend getting there before 1130 if you can, because it is a very popular place. Tables fill up quickly.

If you are staying overnight, it looks like a good place to stop for a drink as well.

If you have any suggestions for where we should try next, please let us know.