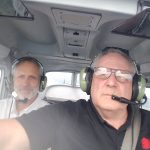 This week’s search for the $300 burger took me (and one of my best friends, Dave McDaniel) up to Williston Municipal Airport, just southwest of Gainesville. Dave is a land developer, and currently working on some projects in the Newberry area, about 10 miles north of X60. Hence he decided to make it a photo flight business trip, and contributed more than his share of expenses. 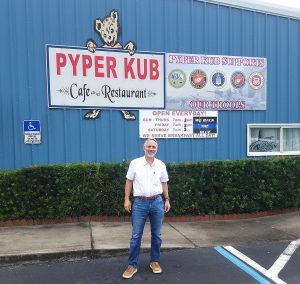 The Flight to Williston

The flight up from Orlando Executive was smooth and fast, with a 10 knot tailwind. We had originally planned on landing in Gainesville but since all the photo sites were in Newberry, we decided to stop at Williston instead. That and also, we are two old man who suffer from TBS (Tiny Bladder Syndrome.)

Dave was my navigator on ForeFlight and did a great job. Williston was surprisingly busy. There were two aircraft in the pattern and several other departures and arrivals occurring when we got to the area. We followed a C-172 on the downwind, entering correctly from the 45 degree angle of course, and I actually had a decent landing for a change.

After ordering fuel, which even full service was under $5/gallon (nice change from KORL), we visited the cafe. The FBO staff were really nice. This is a great place! 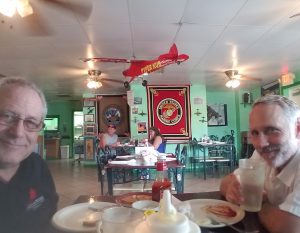 An older couple run the place. I got the husband’s name, Dave, because he was wearing it on his shirt. Didn’t catch the wife’s name but she is much like Dave. They kind of play the old grumpy Florida couple which is entertaining and quite funny.

They are suffering from a lack of supplies, as apparently the food service delivery is slow about getting to Williston. Still, I got what I wanted, 2 eggs scrambled, hash browns, sausage patty and some wheat toast. The toast was warm so huge points for that. I’m sick of getting breakfast in places around Orlando where they bring you cold toast. 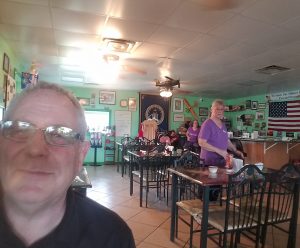 Dave tried to order some things that weren’t available so he settled on a burger minus the bun. Dave and his allergies, what can I say. Anyway we both enjoyed the meal and the service.

The actual cost ended up being more than $300. However we did about .7 hours on the photo flights.

The place is decorated full on aviation, with lots of pictures of WWII aircraft, which I love to see.

It’s not the Waldorf, or even any chain restaurant, but it is a comfortable, welcoming, old fashioned, Florida diner. I enjoyed the food and felt fine all day long, so a plus there. Some restaurant foods have been annoying me lately …

Back when I was a struggling, full time, commercial pilot, some of my favorite flights were photo flights. My favorite photographer was this old, half deaf guy named Harold Kyle. His favorite expression was “Heh?”. However, we had a signal system to tell me what to do with the airplane. He would gesture with the camera to tell me to raise the wing, kick the rudder, roll it over on the side, etc.

It was challenging flying, involving some pretty good yoke and rudder coordination. I always enjoyed the challenge.

Dave doesn’t know all of Harold’s signals but he still indicated to me what he needed, and I did my best to position the plane so he could get lots of pictures of his land under development.

He usually uses a drone, which is rapidly replacing us pilots in the photo field, but his drone was limited to 400′ AGL and he wanted pictures from up around 1200′.

The pictures will be posted here, once he processes them. He used his daughter’s high rez camera so they are all huge, too big to email to me.

After Jax Approach (118.6) helped us stay clear of traffic they gave us radar following and passed us on to Orlando, which made the long flight home (15kt headwind) a lot better.

ORL tower was nice enough to give us straight in to 13, and I was considerate enough to hold short of 7 for departing traffic.

Although it was a little bumpy near the end of the flight, it was still a beautiful day to fly.