John Will Tenney resides in East Orlando with his wife Kathleen and his two children Grace and Sophia. He is a member of the Laid Back Business Builders group.

“Small business is the core of the American Free Enterprise system. My goal in my professional life is to assist small business. Help them start, help them grow, and help them be successful.”

“I don’t like being involved in politics, but in order to get anything done around here you have to deal with politicians. While I will probably never run for any office, I stay involved to keep an eye on them.” 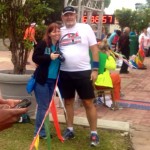 My first marathon in 2013. Nothing meant more to me than seeing Kathleen waiting for me at the finish. I am so thankful for all that she does to support me.

He and his wife Kathleen are the owners or partners of two insurance agencies and a networking training company:
EmployerNomics
PEO Pros
PEO Sales Training