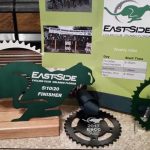 The Eastside Cycling Club had the annual awards party last week and it was one of the best ever. The attendance was up and spirits were high. The highlight of the evening were the awards for the inaugural “5-10-20 Challenge.”

For those that aren’t aware of what it is:

5 – ride 5,000 miles in the calendar year
10 – climb 10,000 ft in one day
20 – participate in 20 club rides or activites
(tracked in the ESCC group on Strava.com)
Additional awards for being a ride leader, and the “Saddle Buster” award, for the person with the most time in the saddle.

The club has had “challenges” for it’s riders in the past. The first that is well documented is the “ESCC Trifecta Award” from 2014. This medal was given to all dues paying riders who participated in a designated charity event, rode Cross Florida and Six Gap.

To the right is the award your author keeps in a conspicuous place, as the effort to get that award was significant.

Other challenges were proposed for the following years but didn’t have the success for various reasons. Some of them started to get pretty complex and were difficult to follow, for example. Some involved extensive spreadsheets, charts, graphs, etc.

The 5-10-20 award facilitator, past club president Crockett Bohannon, managed to keep it simple with a Google doc that was easily accessed, and not that difficult to maintain. Club riders could see at a glance where the were, how they were doing and what they needed to do. Sometimes a little motivation is all we need.

All members at the awards party will agree, it was very motivational as well as rewarding.

I had not been a “regular” ESCC rider as much as I used to be. Racing and other weekend events tend to take me away from the Saturday morning ride. Even if I have that Saturday off, the struggle to get up and be ready for the 7:30am start at the YMCA can be discouraging and enough to keep me out of it.

That changed with the 5-10-20. I wanted to win the award. It was a challenge, a justification perhaps. Something to make all this crazy expenditure of energy worth it. There were many mornings I would have stayed in bed if I didn’t need to get those 20 group rides. I made several Saturday rides because of it, and forgot how “worth it” they are. The fun of riding with the group all the way to the Fort, and even Taylor Creek on occasion had been lost to my memory. It was good to be back. It’s great to swap stories with Marcus, hear Jim’s anecdotes, try to keep up with the likes of Ernie, Volker and Jerry, and help people in the paceline with leaders like Daniela, Megan and others. Truly is a great group of people.

The Sunday Bakery Ride had not been on my list either. Well that changed. I now love this ride. I like the relaxed pace with the opportunity to “shake it out” on Howard Ave. I laugh every time I see the Strava Segment names: “Jethro and Cooter goin’ huntin’ again” and “Dwight Howard made my baby.” Although I rarely stop at the bakery (the food there really isn’t to my palate), I look forward to the sprint up the “Col de Expressway” (Woodbury bridge over 408). The Bakery Ride made it possible for me to “get my 20.”

The 10,000′ was a totally different challenge. Three times I went out to Clermont and tried to do it in a day. Three times I fell short. It makes for a very long day. Finally, on a weekend off, I dragged my family up to Fort Mountain outside Chatsworth, GA. Crockett promised me it wasn’t that bad a climb and an “easy descent with very little braking needed.”

Crockett was both right and wrong. The climb was difficult to me but not impossible. The descent was not easy for me. I’m a bigger guy and gravity takes a big pull on me. There were several sharp turns with a looming precipice on one side that frankly scared me. I had to brake a lot. Well, I chose to brake a lot. It got less scary as the day went on, but I still took it very seriously. No matter, 5 3/4 laps and I had my 10,000′.

I will go back to Fort Mountain this year most likely, but I’d like to go with a group. There is a lot of car traffic on that road and it would be nice to have the company of other riders.

I am glad to hear that the club leadership has decided to keep the 5-10-20 going. It will pull me out. I intend to be more present on ESCC rides this year. 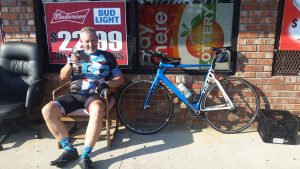 Relaxing with a well earned beer after 10,000′ on Fort Mountain