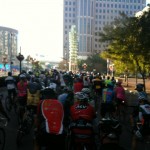 You’d have to be crazy to get up at 5:30 am on New Year’s Day. You’d have to be even more crazy if you stayed up till 2am shooting off fireworks as well. You’d be crazier still to go out on your bicycle and ride around the city of Orlando for 44 miles with 500 other crazies.

You can now call me crazy. Me and almost 500 other people. NO we didn’t get an exact count, it wasn’t that kind of an event. This was a grass roots, “viral” event. Basically a “Cycling Flash Mob.” Spread via email and Facebook, Hal Downing invited people to meet at Orange Cycle on Edgewater Drive and tour the less often cycled roads of Orlando. It’s not often you ride down Orange Avenue, through OIA, or down the wide boulevards of Alafaya, University, Semoran or Aloma. 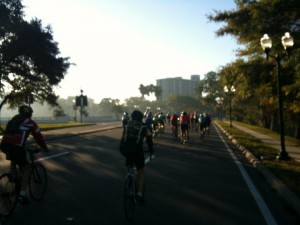 When you have a pack of near 500 riders you pretty much go where you want to, much like the famous 500 lb gorilla. Riding with a large pack has it’s interesting lessons:

Captain Hal called us all together for a briefing promptly at 8 am, which took about 10 minutes. We set off right around 8:10. It took quite a while for the Orange Cycle parking lot to empty, with almost 500 riders filing out in to the street. I tried to stay with several people but we drifted in and out. Yamil, Steve and I informally formed “Team Giant”, with Steve on the Defy 3, Yamil on the TCR and me on the Defy 2. I also tried to stay near my ride home, Cory Thompson and our friend Crockett Bohannon. We were mostly successful. Lack of SAG was a new thing to me, as I didn’t dare stop to take a nature break for fear of losing the pack, and hence losing my way. Obviously there were no road markings, and the map we were emailed wasn’t too specific on turns (no cue sheet.) When we got off of Tradeport Road and entered OIA property we had an amusing incident. The pack caught and slowly worked our way past a Smart Car. The driver rolled down his window and yelled to us as we rode by, “Sorry to hold you up, I’m pedaling as fast as I can!” Turning on to the terminal access roads we actually got to climb some Florida man-made hills (overpasses) and on the exit to the north drove through the E-pass booth on Goldenrod Road. Nobody had thought to bring any quarters so I hope we don’t get tickets in the mail. Turning on to Lee Vista, we rode down to Econ Trail and hung a left, but first we stopped at the Hess station, where nature took it’s course: 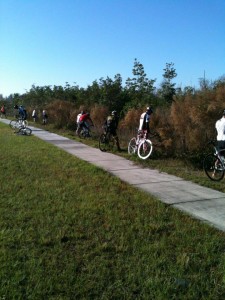 The local police and sheriffs came out to support us without even asking. At one corner we had some deputies holding up traffic for us so we could all go through together. We waved and thanked them very loudly and cheerfully! We headed up Econ and turned down Curry Ford eastward. Had to look out for cars who were trying to get over to the right lane to take 417, but were impatient to wait for the peloton to pass. Not nicely sharing the road were they …

The turn on to Alafaya Trail was spectacular. By this time a lot of people were out and about, both in cars and on foot, so we started to gather some spectators. I saw people I knew waiting at the light as we pedaled by Lake Underhill. Somehow I got stuck in the back as we came up to 50 and I didn’t make the light. Cory and I decided we would sprint up and catch the pack when it turned green. I went on ahead and caught the group as they turned on to University Blvd.

Going down the hill from UCF, I was greeted with an amazing sight. Our group was spread out over three very large blocks moving up University. One of the marshals was next to me and said “Look at that. It looks just like the Tour de France doesn’t it?”

I got dropped one more time as I was hanging back hoping that Cory would catch up. I didn’t want my ride home to get lost! Finally I decided that it was in my best interests not to get lost myself so I started churning across pretty large gaps, managing to catch single riders at a time. If you had told me six months ago that I would be pedaling 22 mph in to a headwind and no draft I would have laughed at you. It’s amazing what regular, dedicated workouts can accomplish. I probably missed a turn, because I ended up going up Semoran and turning left on to Aloma. This is exciting and a little scary any time on a bike and today was no exception. Had to wait for a gap to cross three lanes to get to the left turn lane. Once on Aloma / Fairbanks I started to see smaller “packs” in front of me. I caught one of these as they turned off Fairbanks and on to Orange Ave. Waited for a few cars to pass in the left lane and then got some renewed energy from riding behind the packs. Shamefully, I took this energy and I passed them. Some would call this a “Wheelsucker move” while others would call it “Tactics”. I finally caught Yamil at the Mills Ave light. He and I decided to go for it and sprint to the finish. We picked up Crockett as we turned on to Princeton. We caught the tail of the lead pack as we turned in to the Orange Cycle parking lot. My computer said 44.62 miles in 2 hrs 34 mins. Since we got there around 10:50 that allowed just 6 minutes for stops. That doesn’t seem right. I’ll need to figure that one out. It was a great ride and I’ll definitely do it again next year. 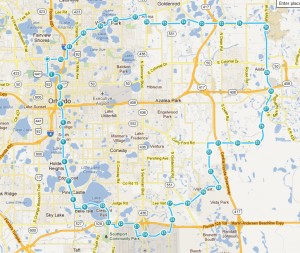 Endomondo GPS Track – Use Link Below for Stats

Here is the Endomondo GPS Tracker Report for my ride today, which includes heart rates. Having fun with my newest toy, a Zephyr Bluetooth Heart Rate Monitor.