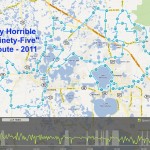 My first “Horrible Hundred” ride didn’t quite go the full hundred miles. I took a shortcut at the end and ended up with 95 miles. Yes, you are wondering, “Five miles? He couldn’t go another five miles?”

It was an effort of will and anger to overcome the pain just to make the 95. About a week earlier, I had sprained my wrist in an ice skating tumble. My skating partner Linda told me that skating didn’t cut up knees and elbows like cycling falls, but she neglected to warn me about sprains. It made a difference. Keeping it on the handlebars for 7 hours was just too much. It hurt, stiffened, hurt some more, started shooting twinges of pain up my arm and finally threatened to leave me for another elbow if I didn’t get off the damn bike. 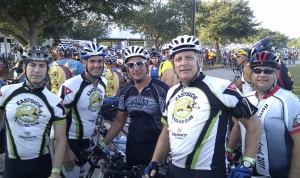 Joe, Doug, Carlos, Me and Cory at the start

We started off just before 8am, although it took 10 minutes or so to get out of the starting area. 2000+ cyclists in a confined space can be a little intimidating.

My first 50 miles went well. The wrist was quiet and I managed to hit 51 miles by 11:30 am. Since I had taken a couple of stops to get there, I calculated my average speed at just under 17mph, a moral victory in the Clermont hilly terrain.

There were some harrowing moments. The first major climb was Tower Hill, aka Northridge road. The fleet had not really split up yet so it was crowded. First, a significant number of folks who had gotten off their bikes and were walking up the hill, and add to this a few maniacs (male and female, so not just a testosterone problem) who decided to weave through the crowd and blast up the slope.

Hint to walkers: PLEASE do not walk up a narrow road, with your bikes, in anything but single file. It is really hard to pedal around walkers walking three abreast, even without considering the steep incline.

The first SAG was right after Ferndale. It looked really crowded and I was feeling OK, so I rode right by. I was hoping to get past the crowd and get to The Wall without having to pedal around walkers again. Hah. No luck. This time there were cars stuck in the fleet in addition to a couple of walkers. I still pedaled around them all but did not pedal up it like I had hoped. 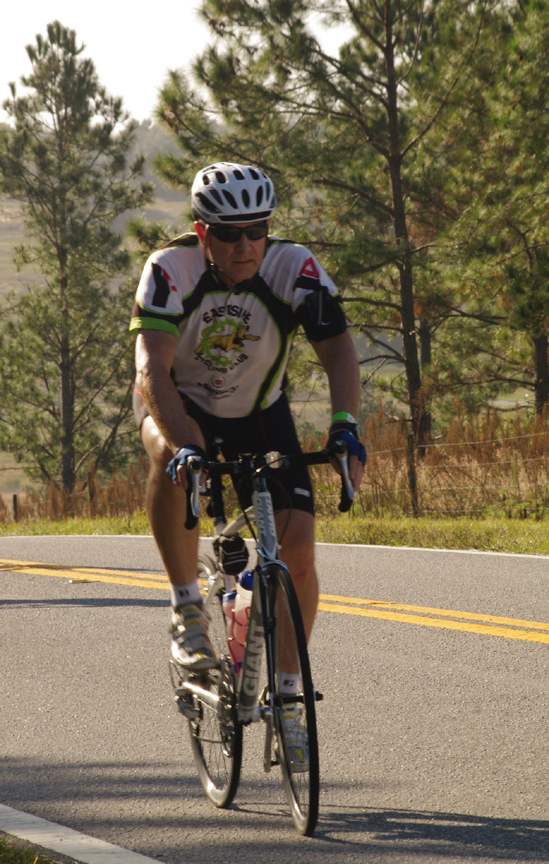 The fleet was starting to spread out by the time we reached Scrub Jay – Climb #3. I was able to get around all the walkers no problem here, and actually made some ground. My “strength” (if I have one) is climbing and I was finally able to do some.

The Cherry Lake stretch went smoothly except for the US 27 crossing. The Lake County Sheriffs, who did an excellent job all day (as did all volunteers) were unable to stop traffic completely on such a major road, so there was a little back up at the top of the hill. Fortunately I was able to go up the left (oncoming) lane and avoided all traffic before having to unclip and wait at the top.

The next SAG was shortly thereafter and it was packed. The waiting line for water was over 10 minutes. The waiting line for other facilities was even longer. The volunteers were really working hard but I am sure they had no idea they were going to have this many people stopping all at once. Still, congrats and a heartfelt thanks for giving up their weekends for us. Thank you! 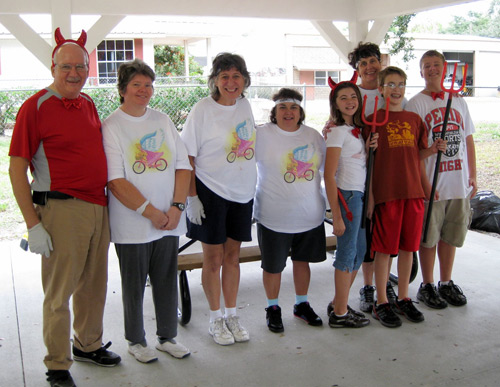 They worked "like the devil" for us this weekend! (photo by Dawn Lovo – lovopix.com)

On into the Mascotte area, the only part of the ride I had not previewed in the previous weeks. It was scenic but the roads were in “horrible” condition, pot holes everywhere and some very strange markings which could get very confusing. Also, the course started heading back towards the east, in to a stiffening head wind. I paced with some friendly riders from the Orlando South club and they were a great help. Thank you for the ride brothers!

About mile 60 my wrist really started hurting. It had been nagging at me for a while but now it was downright hostile, complaining and using foul language. I stopped at the US 27 Tourist Center SAG and decided to take an extended rest. It was here that I caught up with several Eastside club members, including Yamil Alvarado, who offered to pace me for the rest of the ride. 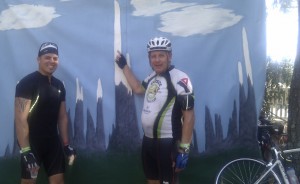 Yamil and I at the US 27 Tourist Welcome Center SAG. I am pointing to the Sugarloaf climb profile.

It started out OK. I was able to keep up with him until we turned on to 455 approaching the famous Buck Hill trio of hills. “Go on without me Yamil” I shouted, “I’m going to rest.” At this point the pain in my wrist was taking its toll, not only in pain but general fatigue. I was spinning up hills. What little climb power I ever had was gone. As Joe Jacoby was quoted saying later, my “Check Engine” light was on and blinking. I rested atop two of the Buck Hill climbs, all the time dreading Sugarloaf. “How am I going to get up Sugarloaf?” I was asking myself, “I can’t even do two Buck Hill climbs in a row, this is going to be bad.”

I made my way to the base of Sugarloaf, seriously worried. I decided to take an extended rest at the base. I shook out my legs, stretched, took a quick bio break and even sat down for a while, drinking a supposedly muscle restoring drink mix, hoping and praying my energy (and legs) would return to me.

God chose to answer this prayer with “No”. 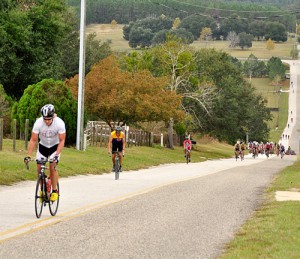 This group passed me as I was resting. I am by that silver car near the bottom, sitting with my back against the fence. (Dawn Lovo Photo – lovopixs.com)

In the previous months, some humorist with a spray paint can has painted some “emoticon abbreviations” at various stages of the Sugarloaf climb. “OMG!” is the first one, shortly after the climb starts. Well I saw OMG go by and I was still pedaling. Next I saw “LOL!” which is in the steepest part. The legs were complaining badly by this point. Shortly after the steep part, where supposedly it gets “easier” (HAH yeah right) the letters “WTF!” went by. Really hurting now. Next was a huge graphic in large letters saying “Welcome to the H100”. Thank you very little.

Shortly after that my legs began to vibrate and wobble like they never have. I had nothing left. I somehow managed to get out of the pedal bindings before I fell over. I was walking. Sugarloaf had beaten me. I hadn’t walked out here since my first day. I saw my deflated Ego laying there on the side of the road. I didn’t even stop walking to pick it up. As far as I know it is still laying there.

This wiped me out. I stopped at Fenstad’s house up top, one of the nicest couples in cycling, who of course had water out for us. It was nice to finally meet Mr. Fenstad. He usually just leaves the Gatorade coolers at the end of his driveway, but today he came out to talk, and he is a funny guy.

Finally I got underway and considered my options. I was seriously thinking about asking a SAG car for a ride. My wrist hurt, my back hurt, and other parts of my body were complaining loudly. I knew my legs had no power left. Some Spanish speaking riders from south Florida offered me a ride in their van, and I was almost at the point of loading up my bike when I said “Hey I know a shortcut. I am going to try and ride it in.” My shortcut involved going back down Fosgate and Blackstill Lake Road and bypassing Hospital Hill. This was probably a good move, as every little hill I ran in to the rest of the way about killed me. I don’t know how I want to die, but I didn’t want it to be today, having a heart attack on my bike.

Somehow I managed to make it in to the Lake Minneola Lakefront Park a few minutes before 4 pm, so I managed to complete my ride in less than 8 hours, a minor miracle (and yes, prayer was involved a great deal today.) The fact remains though, that I did not complete the Horrible Hundred, so it is with shame and humility I award myself the sticker for my car shown below: 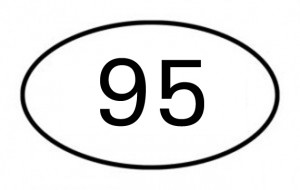